DOWNLOAD NOW
Interest in and research on civic engagement and servicelearning have increased exponentially. In this rapid growth, efforts have been made to institutionalize pedagogies of engagement across both K12 and higher education. As a result, increased positive attention has been complemented equally by wellfounded critiques complicating experiential approaches’ claims and questioning if institutional, financial, and philosophical commitment is warranted. A key complaint from these critical voices is the tightly woven, protective insular core in the field of servicelearning. This claim is not unfounded, nor necessarily bad. Initial efforts to legitimize servicelearning and other forms of communitybased education required group cohesion. The concern, however, is that the initial group cohesion has led to groupthink wherein group members have avoided critical analysis and evaluation. This book aims to prevent groupthink within the field of servicelearning by allowing for the examination of effective alternatives by new voices who can serve as “critical evaluators” from within the field itself. Myriad perspectives are offered, including empirical, theoretical, practical, and community perspectives. Authors challenge preconceived notions of servicelearning, who is benefited by this pedagogy, outcomes of participation and implementation, and most importantly the theoretical, conceptual, and methodological lenses through which servicelearning is even considered. The book allows servicelearning’s major criticisms to be examined, challenges to be voiced, and research agendas to be laid. This book parallels servicelearning’s presence and popularity across various disciplines/fields. Chapters are written from broad perspectives and are aimed to inform servicelearning researchers and educators, community organizations, and policy makers who consider servicelearning as a means to address civic responsibility. Authors expose theoretical and philosophical concerns circulating in the field, and often still occupying spaces on the fringe of discourse, action, and research. The book raises fundamental questions for undergraduate and graduate courses with social justice themes by considering the implications that pedagogies of engagement have on learners and communities. 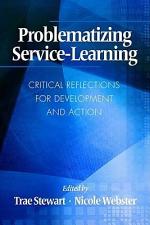 Authors: Trae Stewart, Nicole Webster
Categories: Education
Interest in and research on civic engagement and servicelearning have increased exponentially. In this rapid growth, efforts have been made to institutionalize pedagogies of engagement across both K12 and higher education. As a result, increased positive attention has been complemented equally by wellfounded critiques complicating experiential approaches’ claims and questioning 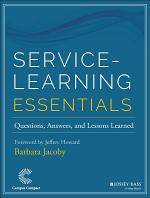 Authors: Barbara Jacoby
Categories: Education
Service-Learning Essentials is the resource you need to help you develop high-quality service-learning experiences for college students. Written by one of the field's leading experts and sponsored by Campus Compact, the book is the definitive work on this high-impact educational practice. Service-learning has been identified by the Association of American 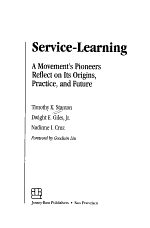 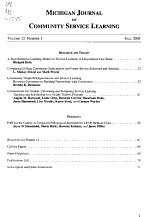 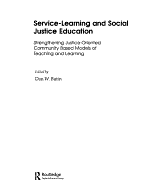 Authors: Dan Butin
Categories: Education
This volume offers a crucial resource for those interested and involved in linking schools and higher education with communities to foster justice-oriented curriculum and instruction. Noted scholars explore the connections, limits, and possibilities between service-learning and social justice education. Exemplary models, unexpected hurdles, and synthesis of justice-oriented research are some