DOWNLOAD NOW
12 True Crime Stories of Murder & Mayhem Sixth Book of the True Crime Case Histories Series (2021) As with the previous volumes of True Crime Case Histories, I use this introduction space as a quick word of warning. The stories in this book represent humanity at its absolute worst. Pure evil. Television crime shows and news articles often skip the messy parts of true crime stories. The details are just too much for the average viewer or reader.In my books, however, I don't leave out the details. I go through hours of research for each story. I search through old newspaper articles, court documents, first-hand descriptions, and autopsy reports. In my books I include details not to shock, but to give the reader a deeper look into the twisted mind of the killer. In the end, it's unlikely any of us will understand the motive of the criminals in these books, but the level of depravity will at least keep you turning pages.That being said, if you are overly squeamish with the details of true crime, this book may not be for you. If you're okay with it... then let's proceed. Volume 6 features: longer stories, more photos, a bonus chapter, and an online appendix with additional photos, videos, and documents.Volume 6 of True Crime Case Histories features twelve new stories from the past several decades. A sampling of the stories include: In this book there's the story of a young English man that had plans to become the UK's most notorious serial killer, but couldn't keep his mouth shut after his first kill and bragged to over twenty of his friends.Another story covers a group of four young men who believed they could do anything they wanted because their lord Satan protected them. Satan apparently couldn't protect them from prison. There's the story of a San Diego man who made it his life's mission to help young men avoid a life of crime. His good deeds resulted in his entire family being butchered by a boy he was trying to help. Another killer, a father of eight children, lured women to his boat, raped them, and threw them overboard. Ingenious forensic science was eventually used to catch the killer. One story of a young man that couldn't handle being rejected by his teenage girlfriend was suggested to me by a reader whose daughter had a close-call with the killer. Plus many more disturbing stories. The twelve stories in this volume are shocking and disturbing, but they're true. These things really happen in the world. We may never understand why killers do what they do, but at least we can be better informed. You may have heard of a few of the stories in this volume, but there are several I'm almost certain you haven't. Scroll up to get your copy

Authors: Jack Rosewood
Categories:
In the following true crime anthology, you will read about twelve true crime stories that have baffled investigators and captured the imagination of the public for years. Among some of the more shocking stories is a trio of mass murder cases from around the world. You will be intrigued to 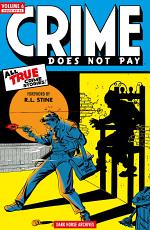 Crime Does Not Pay Archives

Authors: Dick Wood
Categories: Comics & Graphic Novels
Tommy-gun-toting toughs roar across the pages of Crime Does Not Pay, the sensational 1940s comic that enraptured millions with its scandalous stories of criminal scum, ripped right from the headlines! This hardcover collects issues #42–#45 of this infamous series and features a new foreword by Goosebumps author R.L. Stine! Collects

Authors: Andrew J Clark
Categories: Comics & Graphic Novels
Chilling. One of the best words to describe the new cases presented in volume 6 of the series Solving Cold Cases. These gruesome crimes seemed to hit a dead end... That is until the cases were reopened for investigation and then solved thanks to modern technologies and new investigation techniques.